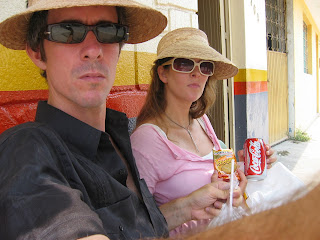 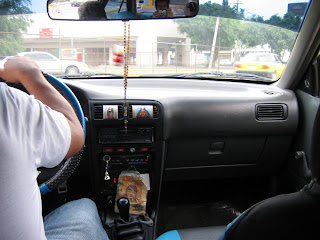 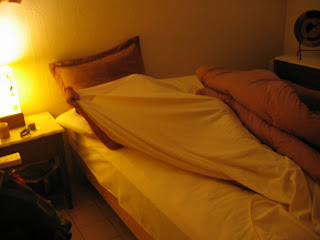 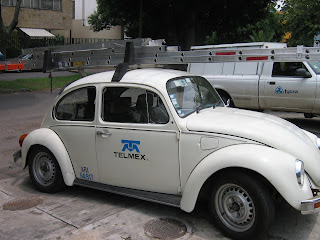 They say the CEO of Telmex is the second richest man in the world. 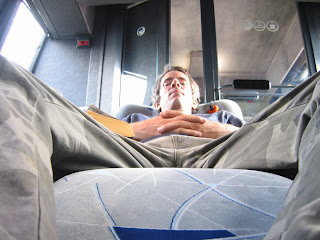 Thanks to my new friend Susanna, a tiny Italian woman who always wears thong bathing suits under her sarongs, I can now have a conversation in Spanish. Susanna talks to everyone, and in her three and half years in Mexico has become fluent. Her blond two-year-old in tow, she gives hell when necessary to the construction workers remodeling the space where she and her husband will open their restaurant in the fall. She knows the names of waiters. She swears in Italian and translates for me with a laugh: she has just told her daughter that the little girl is “breaking her balls.” Susanna says with tears in her eyes that pregnant women are the most beautiful women in the world.

In Guadalajara, five hours away by bus, there’s a midwifery clinic where you can have your baby in a big pool of water. Adam plans to teach this seagoing baby to swim before she can walk. Lying on our bed under the fan surrounded by mystifying piles of square pieces of cloth—what are you supposed to do with these things?—we try to imagine washing diapers at sea.

We set off to attend the orientation at the clinic. Our neighbors have warned us: don’t take the bus that goes through Aútlan. But we take the bus that goes through Aútlan. It lumbers along tiny winding roads high in the mountains. From my seat by the window I look out over sheer drop-offs, fighting nausea and morbid fantasies of this clumsy piece of metal rolling down the cliff and exploding. We get stuck repeatedly behind trucks hauling their cargo slowly, painfully up the hill. I distract myself watching the dubbed version of “Garfield 2" playing on the video monitor.

At the little hospital that houses the clinic, the presentation is all in Spanish but since my knowledge of Spanish is heavily weighted toward pregnancy/medical terminology, I can get most of it. The midwife has generously offered us a room in her house. We stay up late reading stupid books again. The next morning she joins us over breakfast to chat about our lives and plans for the baby and she is full of information and energy and I start thinking maybe I can do this. We talk about taking our baby on a small boat across the Pacific and ask if she has any suggestions about where to actually put the baby. She asks, “Do you have a drawer?” We do have a drawer!

At the bus station we buy our return tickets on the ETN line, La Linea más Cómoda. From the waiting room to the legroom, this is definitely muy cómoda. Unfortunately our seats are all the way in the back next to the bathroom and the door of the bathroom is broken. It flies open at random releasing smells and leaving people inside clutching at the miniature doorknob. Anyway, I recline with my headphones to enjoy a dubbed version of “Brubaker,” a 1980 film set in a Southern prison and starring Robert Redford. The details are fuzzy since my headphones aren’t working too well.

The militares board the bus at a roadblock and walk all the way to the back. A man wearing camouflage and holding a machine gun demands our passports. Adam understands it’s safer to speak English; startled out of my reverie, I tell him in Spanish that our passports are in Barra but I do have a driver’s license. He squeezes my neglected Ziploc bag of knitting, says “OK,” and leaves. On a trip to get blood tests I've already been kidnapped by an off-duty taxi driver who insisted on exploring Manzanillo and picking up and dropping off acquaintances while reassuring me, "I'm a friend," and "I love American women. Later, you must call Jimmy Boy. I will pick you up anywhere for free." The militares are as nothing to me.
Posted by Clank at 10:55 AM No comments:

There was a man sitting on the main street tonight in his wheelchair, wearing sunglasses and holding a guitar and an orange and white kitten tenderly wrapped in a washcloth. When we passed going back the other way, his wife had rearranged his chair so he could look out towards the passing cars, and for some reason she wanted the kitten. “Dame la gatita!” she demanded.
Posted by Clank at 7:51 PM No comments: 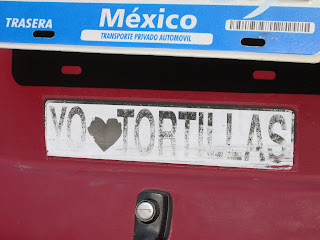 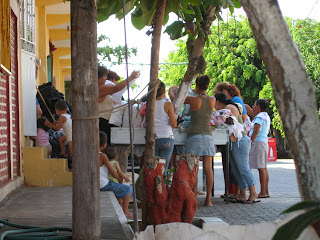 We were sitting on the curb one afternoon waiting to see if the internet place would or wouldn’t open. Behind me, Adam noticed a group of women digging through a pile of clothes set up in a big metal bin and chatting, maybe a little competitively, like at a 75-90% off sale, the kind my friend Shelby used to find all over greater New Orleans. Everyone was holding up articles of clothing and trying to figure out if they would fit. Later, a man pulled up in a truck filled with fresh pineapples.
Posted by Clank at 9:23 AM No comments: 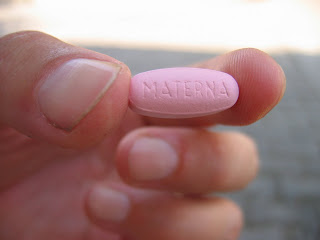 We recently took a trip to Colima, a city about two hours away. Our new neighbors drove us, so we had the unusual experience of hurtling down the highway. There don’t seem to be any regulations regarding passing in effect. Cars and trucks speed around each other at will, the driver being passed generally understanding the need to pull off slightly onto the side of the road. It is nice, I decided, to walk. And the straight-to-video American movies dubbed in Spanish are themselves worth the price of a bus ticket. (I saw one recently starring Cedric the Entertainer and Vanessa Williams about an ill-fated cross-country roadtrip to a family reunion in a brand-new, Burberry-plaid-upholstered Lincoln Navigator.)
For lunch our neighbors suggest one of the restaurants near the lush, green parks in the middle of town. The squares are lined with nineteenth-century buildings, some still unrestored after the earthquake that struck some twenty years ago, ferns growing from their crumbling balconies. My sandwich drips with brilliant yellow mustard. We make several passes around downtown looking for the archeological museum that Lorraine wants to visit, which ends up being next door to the restaurant. Lorraine’s husband David says he is sick of museums.
My true mission here is finding the Farmacia Especializada, which stocks a drug called Rho-Gam that I am supposed to take at this stage of pregnancy as a consequence of my negative blood type. At least, if I were in the U.S., I would be expected to take it now. Here in Mexico the practice is to give it to you when the baby is born. But I had convinced my doctor to prescribe it, and here I am, tracking it down. Escaping high-minded pursuits, David offers to drive us, and we go off in search of the Boulevard Camino Real.
At the pharmacy, there are at least six white-coated employees behind the counter, and no customers. Pharmaceuticals are arrayed on the white open shelves behind them like expensive perfumes. I try to interview two employees to find out whether the drug they sell, made in Mexico and called Rho-something else, contains a form of mercury that used to be used as a preservative in some drugs made in the U.S. Halting Spanish, confused pharmacists. Finally I guess I say “el tiene mercurio, como conservador?” clearly enough to be understood, and they assure me that this Rho has only been preserved in the refrigerator. So they pack the injection in ice and suggest una clínica in town where I can get it quicker than in the nearby hospital.
After soliciting vague directions from people on the street, we find the Clínica Cordoba. We enter an empty hallway where a receptionist sits behind a desk. There are no other patients. I walk to the nurses’ station and explain that I have a shot here, and I need someone to inject me with it. A nurse immediately takes me into a room, gives me the shot, and charges me $1.50. She then engages in a lengthy search for change for the equivalent of a ten-dollar bill.
We collect Lorraine, head back out of town, and find ourselves bumping along cobblestone streets in a nearby village. “Isn’t this the way we went last time?” David asks. “When I had to ford a stream?” Fortunately the water is low this afternoon, and we drive through green countryside, cows and horses grazing beneath the sloping hillsides, a few locals bathing in the hot springs along the side of the road.
Posted by Clank at 9:20 AM No comments: 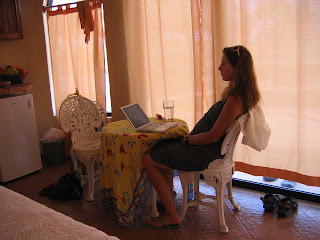 Note trash hatching pregnant fruit flies, glass of water near computer on rickety plastic table, and foreboding crack in the back of the unoccupied plastic chair. Adam reclined a little too far one evening, and I am about to do the same.
Posted by Clank at 9:16 AM No comments: 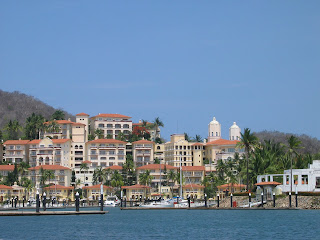 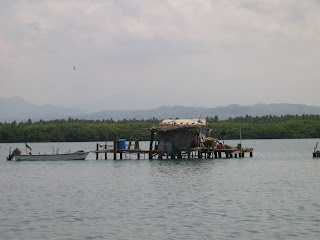 Leaving the lagoon, towed (for the first time ever) by a miniature power boat, we speed past the fishing camp where an old man seems to live, hanging out sometimes in a hammock on the porch, waving cheerfully. The self-contained, expensive, empty Grand Bay hotel rises up the hill to our left. The tiny powerboat curves past mangroves and what smells like a garbage dump hidden behind some sand, and then through the canal toward our boat’s temporary home in the Cabo Blanco Marina. As we’re nearing the dock, which calls for precise navigation, Adam passes me the tiller and goes up forward. I think I do a pretty decent job with a bunch of men watching.
Posted by Clank at 9:03 AM No comments: