At SeaWolf and Co. we always work harder to bring you the best possible blog at the lowest possible price—that’s our mission. But who WE are is more than just a leading provider of original content. SeaWolf and Co. is also a group of highly motivated individuals who won’t rest until “mission accomplished.” And while all of our team members are exceptional we’d like to focus this month’s recognition on our globe girding supply chain partners who have been working so hard to restore original images to the site: 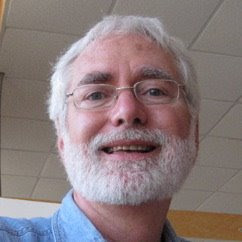 Dan: concept development and product procurement
Location: Rotorua, New Zealand
Team Member Quote: ”I already bought it, who should I send it to?!” 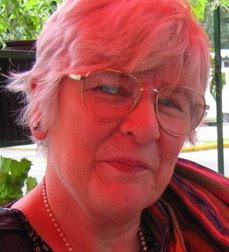 Margaret: just-in-time warehousing and transshipment specialist
Location: Gainesville, Georgia
Team Member Quote: “It was returned when I used that address!”

Pueblo Azúl
A play in one act

Characters:
Jessica, a white woman in her late thirties, dressed in a knee-length skirt and a sleeveless black shirt with a prominent avocado smear on one shoulder. She is never seen without
Lulu, an energetic child of about a year and a half
Adam, a white man, also in his late thirties, wearing a pair of paint-stained shorts and a t-shirt. Currently the family breadwinner.
Rat, a medium-sized rodent
Waiter, a Mexican high school student with carefully styled hair
Mariachi band, enough said

Act I, Scene 1
A one-room apartment above a restaurant in a small Mexican beach town. Outside the door, laundry hangs on a line. The Beatles’ "Imagine," played at top volume, is abruptly turned off, replaced by a blast of cumbia music. Two men can be heard arguing in Spanish. The music gradually fades as light comes up on the room shared by Jessica, Adam, Lulu, and Rat.

Toys are scattered across the floor. Five beds of different sizes have been pushed up against the walls. A plastic table, of the kind used outdoors, with a single plastic chair, sits next to the refrigerator. Rat is poised on its haunches on top of the refrigerator, preparing to eat a ripe avocado with a spoon. Jessica and Lulu lie on one of the beds. Jessica is reading a detective novel aloud as she nurses the baby.

Adam enters. He places his hat and sunglasses on the table and prepares to sit. Notices Rat.

Adam: Wha—this is disgusting! Rat is eating our food!

Rat drops the spoon with a clatter and runs into the rafters.
Jessica looks up.

Jessica: At least it’s not drinking our coffee.

Act I, Scene 2
A room in another apartment complex in the same small town. The walls are painted an unpleasant yellowish beige. On top of a dresser a pepper grinder, a half-empty bottle of beer, and a roll of toilet paper are visible. A bed takes up much of the room. In one corner a miniature refrigerator with a small microwave bolted to the top emits a loud, variable hum.

Jessica: What’s that smell? Do you smell something?
Adam: Yeah. It’s sewage. We are right next to the sewage treatment plant.
Jessica: Yeah. (Sets the baby down)
Lulu: Baila, baila! (dances)
Adam: So, what’d you guys do today?
Jessica: We bought some organic beans at the Mega. I was thinking we could cook in the fridge—you know, like, sprouting stuff! And I found this thing that froths milk without using electricity!
Adam: Uh, sounds good.
Jessica: How was work?
Adam: OK.
Jessica: Are they making progress?
Adam: Not really.
Lulu: Ererehehbop?
Jessica: So—how much longer?
Adam: I have no idea. (Pause, then) Should we go for tacos?
Jessica: Sure. Um. I’m pretty sick of tacos.
Adam: Well, we could get pozole.
Jessica: That’s more corn.
Adam: Yeah.

Act I, Scene 3
A taqueria. Smoke from a grill billows over three plastic tables set in the street. Across the street at the bakery a child aged about two, covered with red spots, is eating a donut.

Adam: Hola, buenas noches. Tres de asada, por favor.
Jessica: Igual. Gracias. (Turns to Adam. Lulu gets down and runs toward the sidewalk. Jessica follows. Several minutes later, they return. Lulu squirms, is put down, runs away again. Jessica prepares to follow)
Adam: (sotto voce) Keep her away from that kid. He has mumps or something.
Jessica: What? (Disappears)

Adam: Watch out. She’s getting salsa everywhere.
Jessica: Could you pass me a napkin?

Adam: I didn’t know mariachis could swear.
Jessica: Maybe they can’t. I just made all this up. Except for the part about the rat. Come on, let’s finish our tacos, buy a family-size Corona, and go watch the moon come up over the breakwater. (They smile at each other.)

THE END
Posted by Clank at 4:31 PM No comments: 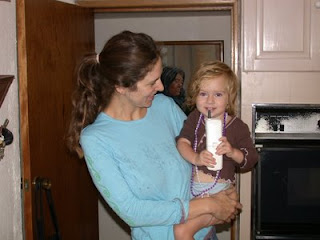 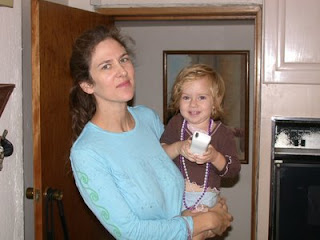 Lulu has a firm grip on her favorite accessory, the phone.

Thanks to midwife extraordinaire Joni for the photos, and for opening her home in Guadalajara to us!
Posted by Clank at 1:34 PM No comments: