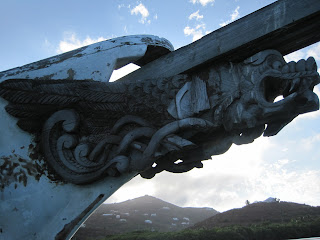 The light at dusk is spare and gentle. This is a new landscape, an old landscape. Crossing a hill obscured by tall, dry grasses, crossed with beaten paths, birds calling in the low, leafless trees, I find myself on a gray sand beach. There's a heavy swell from the north. Next to the sign that said Columbus landed here the usual trash is scattered, unnatural jetsam. A plastic water jug, discarded clothes, a deflated green inner tube, paper bags from the drive-through. A couple of teenagers sit on the hood of a car, listening to a melodic Caribbean rhythm with just enough of a beat to make it cool. The Arawak village is long gone. Columbus didn't stay—the Arawak had arrows tipped with manchineel. Will this place welcome us?
Adam was joking yesterday that we should write a cookbook called Cooking without a Choice. I had just steamed bok choy in the oven and it turned out great. Really not bad. We only have one pot at the moment and he was using that to cook a chicken with za'atar, which is a mix of toasted thyme, sumac, and sesame seed that currently intrigues the palate of every member of the crew.
I don't mind things the way I used to. There's something about constant change, about living with the elements, that has made me stop fetishizing the familiar. But we've been thinking maybe this is the place to stop awhile. Make some real money. We've weighed the options and aimed our collective will at this island, eighty square miles of ancient lava. We're pressing on the rock for the secret door that will yield. But I don't hold onto things so hard anymore. If it's not here, it must be somewhere else.
Posted by Clank at 12:33 PM No comments: 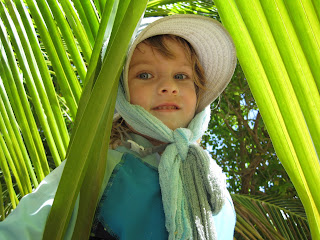 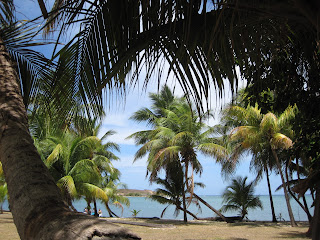 Where Columbus made landfall in 1493 and was attacked by Arawaks. 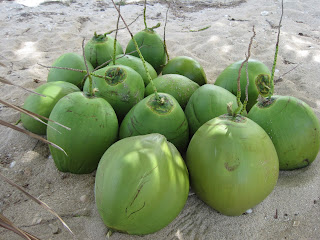 And Tallulah learned to twist off a low-hanging coconut all by herself. A long drill bit and this is our drinking water.
Posted by Clank at 11:24 AM No comments:

Sitting in a hotel room with the TV on—I realize suddenly that I don’t understand. I don’t understand what’s going on. Is the purpose of these ceaseless reams of stimuli to dislodge the whole idea of meaning? None of those old coherent (weren’t they?) narratives, the simple stories I used to follow, hunkered down over a Stouffer’s French bread pizza after school.
But dislocated signifiers are nothing new. We took the boat over to St. John recently, and picked up a mooring in Hawsknest Bay—forest green, azure, pale yellow—the perfect image of the Caribbean, gentle—now—hospitable. Shards of pottery, here and there, the only sign of slavery—smashed to bits long ago. The slave revolt of 1733 ended in flames and dismemberment. And the cane kept growing. I watched some people on the beach. Women carrying wooden frames. A small group of people clumped together, some in beach chairs. The women setting up a frame that looked like monkey bars from a school playground, hanging a towel on it, walking away. People, vaguely visible, coming and going at the far end of the beach—never appearing, their shadows passing through a building, maybe a house, maybe not. My mind idly felt around for meaning, came up with nothing, and, because of the sound of the breaking waves, the hypnotic curve of the surf rolling over the reef, let it go.
Tallulah and I swam to shore, lifted by the swelling water. And there, right in front of us, was an old plantation house made of stone from the hillside. Stone urns from which flowering vines sprung, and women’s clothes hanging on a line to dry. Papaya and coconut, shorthand for abundance. Here was order—perfect in its proportions. A blind, insistent order, as if stone and perfect symmetry could force harmony out of a world that had never yet made sense.
Posted by Clank at 5:30 PM No comments: