I've noticed that there aren't many pictures of me in the blog lately. It's because I often look like this. 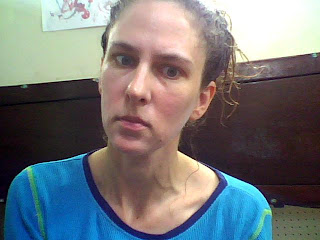 At least when there's a camera around. And especially lately, since I've been proofreading this humanities textbook, the take-home of which seems to be that the world is ending. That sucks! I've begun to wake up in the small hours worrying about overpopulation. And the only thing I can do about it is to not have any more kids. Which won't even make a difference anyway. It didn't help that yesterday I was proofreading an article about the meat industry while Adam and Tallulah were eating a steak. What is the right way? I wondered. It's just an inchoate, no-doubt ego-driven longing I have, to fix everything, and short of that, to understand.
As I was taking a walk I got waylaid by an old Culebrense lady who lives in a ramshackle cement-block house overlooking the airport. I've noticed her house before because it's on a corner, and you can appreciate from every angle how absolutely overgrown it is, how unfinished, the goats grazing in the weeds, the rebar sticking out of the roof, building materials and broken appliances stored in the open basement, soap suds from the washing machine running down the hill. She asked me if I spoke Spanish and when I said, Un poco, she explained that her knees and ankles were killing her. We chatted for awhile about the healing properties of basil and blackberries, and living on boats, and the Virgin Mary, and the paved roads. Dios te bendiga, she said as I left. Do you know what that means? Yes, I said. And you answer, Amen. Amen, I said. I told her I'd come back after hurricane season and teach her English. Afterwards I felt better, but then I woke up again this morning imagining relentless hordes of humans overtaking every last square inch of the earth.
My stepmother Wendy sent me an article recently about a new book entitled Le conflit: la femme et la mère, by Elisabeth Badinter, one of those particularly French intellectuals. Badinter argues that mothering has become more oppressive thanks in part to renewed concepts of “ecology.” That is, childbirth without drugs, breastfeeding and cloth diapers have all become tools of the patriarchy. “The baby has now become 'the best ally of masculine domination.'” That's not a new argument. And I'm not really sure how anybody thinks they're going to have a baby and then go back to what they used to think of as normal life. Return to work, sanity, all that crap, in the same way as before. It just simply doesn't work--I mean, in my experience. I had all sorts of notions about how awful the whole thing would be. How resentful I would feel of the new demands on my time. And in order to create a context in which I would not go stark raving mad, because I've always known I had it in me, I thought to myself, I have to quit my job and go far away. And Adam has to quit his job, too.
I realize this solution isn't possible, even desirable, for everyone. And truth be told, I love working as much as the next career woman. (What I wouldn't give for an office!) But herein lies the main problem I have with what I understand of Badinter's theory—not only that motherhood, properly done, should make you more wasteful and less conscious, but that motherhood is strictly a woman's issue. In my view, two things are necessary: to accept the basic essentialism of sex, and to respond to it creatively. And I guess Adam and I have traveled around the world trying to work that out.

Next stop, probably (because while cruising you always have to hedge your bets): Carriacou. Moving on--sometimes, it's actually not a bad way to solve your problems.
Posted by Clank at 8:43 AM 1 comment:

I have been earning some money this week, mostly fixing other people's writing, all the little matter out of place, which makes me want to write imprecisely, scattering commas. It's a textbook, and I think about the readings, arguing with them, inserting comments in the margins, which someone will read, eventually, and perhaps become irritated. I proofread an article about the origins of religion. Ages ago, it said, everyone knew religious myths were metaphors.
I remembered something that happened during the months I spent at a Buddhist retreat center in Junction City, California, the summer before I started graduate school. A series of special teachings was taking place. As part of this, a Tibetan monk came--to give a talk, exist. He was a short man with eyes as dark as a snow man's. He was called a Terton, which means someone who reveals--knowledge--maybe buried in a rock somewhere. Maybe in a dream. He spent a couple of days at the gonpa and on the day he left, everyone lined up on either side of the long drive leading out to Route 299, and Redding, Yuba City, Sacramento. Some held flowers ready to toss in his path. I stood there with a pink cosmos. As the Terton passed, in the back of a red Jeep Cherokee with the windows rolled down, I reached out to give him the flower. I think our hands met, but I'm not sure. We looked each other in the eye. It was as if I'd touched an electric fence. The world went white. I lost a few minutes of ordinary time.
Later somebody said to me, He zapped you, huh? I saw you afterward, kind of standing there. Um, yeah, I said. And wandered away. Names are coming back to me now—it might have been somebody named Chris. Chris and Sonja, who were so in love they decided that they needed to give each other up. Tall, blond Chris, who worked on the roof, tiny, dark-haired Sonja, keeping to herself. I ate Oreos and watched her surreptitiously across the room in the basement dorm we shared. It was a mistake to think I had forgotten details. Is who I am now somehow a result of being charged, overloaded, by that single passing glance?
I was taking to Diane in the heath food store the other day. She had just watched someone die. An old man, a jíbaro, from a long line of Culebrenses who talked in the old way, who remembered, or claimed to remember, the way things used to be. The man was bedridden, surrounded by family who did not want to see that he was dying—she said—for whom dying, it seemed, meant giving in, being subject to. Quieres sembrar cocos? they demanded. No? OK, then eat your food.
What does it mean that to die is to go plant coconuts? That death holds pastoral boredom? Or unending labor? Is this a tropical heaven? Or a vision of hell?
Posted by Clank at 2:42 PM No comments:

Life in blue and green

I was watching a short film made by The Jam Handy Organization for Chevrolet in 1941. It was intended to help management improve the sales technique of its workers. I learned some interesting things. I learned that car salesmen used to go door to door. They'd even show up at construction sites to try to sell the foreman a new truck. I learned that the salesman is supposed to drive the car first, before he lets the potential customer get behind the wheel. I got a clearer sense of what people meant when they said, “It's a man's world.”
In one scene, an unsuccessful salesman is saying to a co-worker, “I just don't seem to get the hang of this business.” And I could hear that standard expression when it was still fresh and slangy, but not too much so. How the hang of it felt to say, how it described a new way of seeing. The way something hangs. The salesman tests it out in his tongue. It describes his confusion, his inexplicable inability to get why his marks just won't buy.  “How is this engine different from the Plymouth?” one potential customer asks. “Well,” the salesman chuckles, caught, “I don't know how it's different. I just know that the Chevrolet is better.”
It's hard to remember that the people in the film are actors. In one scene, the dealership manager sits with his father on the old man's porch. It must be summer. The old man is wearing a white handkerchief draped on his head, dispensing sage, hard-earned advice about how to responsibly train your employees. The men are so earnest, so clear in their emotions, each one telegraphed precisely to the viewer's reptilian brain.
Since I started Fear Grin Editing, No Job Too Big or Too Small, I have, thanks to a friend on the inside, been able to penetrate to deeper levels of the publishing business that I ever could have made it to, much less known about, before. Maybe I'll get some work out of this. If nothing else I've had occasion to reflect on corporate America. From here it seems a strange world filled with mirrored doors. Leaded gas. Carbon emissions. Global warming. And in the face of all this there is the beauty and order of human culture. In this case its beauty is unsustainable, it sets itself up in opposition to the natural world, and it is no less compelling for that. Some part of me adores the generous curves of the Chevrolets, the high-heeled shoes the wives wear, the stilted voices of the salesmen. I look at the strange world of people and I think, surely one will figure out a way to save us. And if not, what can we learn by dying?
I remember reading an interview with a Buddhist priest—I can't remember his name now, something long. It wasn't his original name. He was an American. And this guy had it. Yeah, I'd call him enlightened. The things he said didn't make you feel comfortable, but at the same time, they were oddly reassuring. When the interviewer asked, “What do you think happens to the individual consciousness after death?” He responded, “That presumes there is an individual consciousness.” And so I feel hopeful. I feel hopeful about the order of things. There is some rightness to all of this, some inexplicable rightness. And if I have some spare time to get depressed, I look up at Tallulah's portrait of herself in my arms. 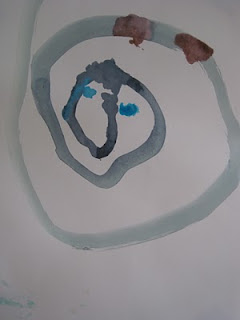