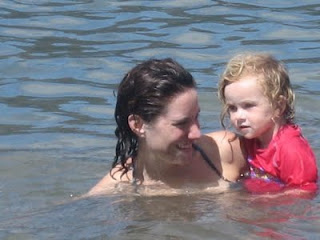 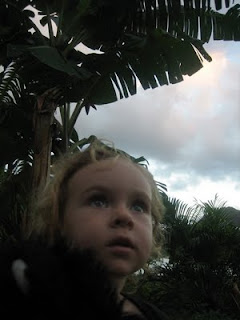 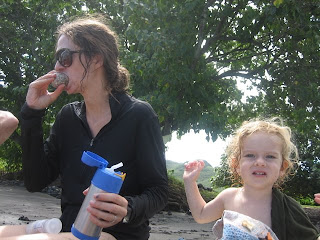 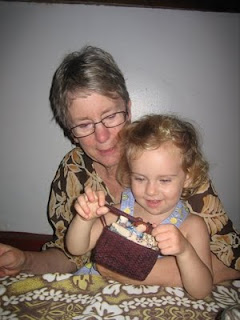 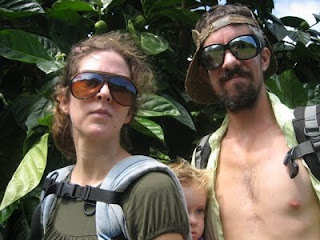 July is a month of festivals, held in a large covered area with a restaurant. We attended once. As we ate breaded shrimp and steak, French people in traditional costumes who’d come halfway across the world danced for the Marquesans their strange repetitive circular dances. Women waltzed with women, the shorter ones leading. Marquesans clapped and cheered, swinging their arms in concert with the music. The dancers broke and went out into the crowd in search of partners. A young man brought a middle-aged Marquesan woman out for a turn on the floor, and when he returned her to her table, invited her husband to dance. “Toi et moi?” I heard the man respond, shaking his head non.

Days pass slowly and mysteriously. We sit on the beach for a long time, dazed by persistent flu-like symptoms. A Marquesan appears with his horse. I look over and Lulah is sitting with him as he talks to a couple of women, what looks like an oreo in her hand, rapt as she listens to flirting Marquesan. A couple and their grandchild pull up in one of the shiny new 4x4s that most people here drive, flesh overflowing the bounds of their pareos, pull out a bench. The man pulls out a bench, sits on it and begins to tune his ukelele. He plays and sings to the accompaniment of the high tide.

I could say something else about all this, probably, but my brain has been mostly given over to processing the constant movement of this anchorage and the nausea that accompanies it, draining away my inspiration.
Posted by Clank at 1:08 PM 2 comments:

Before coming here I was hungry for news. What was it really like? I wondered, consuming the messages from friends and acquaintances who’d traveled this long way. But no, what was it really like? Of course there’s no singular answer to such a question. Dogs in the street with full udders, hundreds of chickens—huge, mild grapefruits, custard apples and frangipani. It’s laughable to think one could answer such a question on the basis of a week’s acquaintance. In this village of less than two thousand people there are many drag queens, who wear lime green tap pants and kitten heels, who have darkly penciled eyebrows and run the local grocery store and the pension. There’s obviously a different understanding of sexuality here and I want to understand it better.
The money I dispense like brightly colored pieces of paper and shiny bits of metal. On one of the larger bills, some highly decorated guy, some naval officer, sneers as if saying, I’ve tasted the women, and, if I must admit it, a few of the men, and they were délicieux, selon la manière primitive d’une île isolée. His hands come out of the empty space in your pocket holding a small glass of absinthe and a Cuban cigarillo.
The sea is soft, not too salty, and there are plastic bottles and beer cans in the weed-choked stream that flows into the bay of Taiohae. The air blows down over those verdant volcanic peaks like the sweet damp breath of a dragon sleeping on the other side of the island. I like such cheesy similes. I’ve been reading children’s books about mythical figures and I appreciate their simplicity. Clear answers, not too much information at once. Because otherwise, the vivid, hydroelectric force of arriving on the other side of the world, future unknown, might pour in.
At bedtime we lie in the forward berth, the rocking of the boat jingling the cutlery, knocking the books together in the shelf, and rolling the baguettes against each other so that they churn up crumbs across the countertop. The ineffable force of the universe soothes us. We watch the clouds silently obscuring the moon, that sweet dragon’s breath on our skin. In a couple of weeks, we’ll move on.
Posted by Clank at 12:57 PM No comments:

It was just about perfect.
We've been in La Cruz for over 4 months and I have it dialed. This is good because I checked out of the country four days ago... I'm ticking things off my list--getting them done at N American speed. I catch the bus into Puerto Vallarta and walk to my friend Hilario's shop. I've never seen it before and it's impressive. No wonder he drives a late model BMW SUV. There are two floors of lathes and milling machines. The kind of machines that, given the right raw materials and direction, can make an identical copy of themselves--I love that thought. And there's art on the walls, each piece with its own custom fabricated metal pedestal. But no HIlario, I feel a slight hesitation in my momentum but soon spot one of his workers who knows me and I wave him over. I tell Jesus what I need and he starts to tell me how they're actually not working today so I'll have to come back Monday. I hit him with a pause. "I'll be back in an hour...with lots of money." We part laughing, knowing he's not going to have it done in an hour and I'm not going to have lots of money BUT I'll have it today and he'll get paid. In an hour I spot Hilario. He's determined to drive me wherever I need to go so we're off. I ask him what's his key to finding good workers and he says his best guys are the ones who started out sweeping the floor. I file that nugget away.
We stop at "Bolt World". I buy bolts, Hilario ribs the owner while the owner talks trash about Hilario to me. This is good guy fun we're having at "Bolt World." Next we have lunch, lunch transcends good guy fun--this is something. Bellied up against the sidewalk around the corner from "Bolt World" is a lunch wagon "Tortas Ahogadas" with a couple of tables spilling out into the street and a quiet crowd eating or waiting. We grab a table. Hilario says this type of torta is from Guadalajara and they're very hot though he quickly adds these aren't too hot...I think he's worried I'll disappoint him here but when we order I say I want mine like Hilario's. He looks at me and smiles, he says to the cook "he's practically Mexican." The cook doesn't seem impressed. He's in a routine. I watch him go through his moves, a deeply worn groove, no wasted movement. Rolls are hustled along a toasting rack, hunks of meat are chopped then stuffed inside, add some pickled onions and smother (ahogar them) with the special sauce. Boom.
We finally have ours and I just know this is going to be really good. But the first bite is a revelation. The roll is softened with the sauce but that toasting gives it a firm center that holds up like good al dente pasta. The sauce is hot but not too hot, the bread and the meat are your friends here and keep it from overwhelming, instead it creates an atmosphere in which all the flavors and textures do their thing. The meat is prime, no dubious chewy bits, just melt in your mouth rich, smokey tender chunks. Those thin slices of pickled onion and the sauce work together to balance the richness of the meat. The whole thing works together, each element balanced and enhanced by the others. OK, so I had a great sandwich.
We get back in the car, return to the shop and sure enough there's my newly machined fitting ready to go. I go through the formality of asking Hilario what I can give him for it and as usual he says "nothing." I give Jesus a goodly sum and I'm off to catch the bus back to La Cruz. The next thing I notice is a group of rowdy teenagers get on the bus I'm riding. They're heading to the beach, full of themselves and making too much noise in the back seats. Riding the bus often devolves into an experience that just needs to be endured and this ride is shaping up that way. The next stop, adding insult to injury, a mariachi steps on board. The bus riding mariachis tend to be the worst of their breed and sure enough the teenagers in the back start yipping and howling in mockery. As he makes his way past me I hear the mariachi say in a low growl "direct from Hollywood." He stations himself right in the middle of the teenagers and immediately hits some cords that sound fantastic. Over the next ten minutes he's easily won over the entire bus with the best live music I've heard in years. The crowd in the back sings along to a couple of the traditional songs and lets him loose to do the others on his own. At this point I'm glad to be sitting by the window with sunglasses on because I'm alternately sobbing and laughing at myself.
I love these people.
I'm really going to miss this place.
Posted by Clank at 12:41 PM 1 comment: